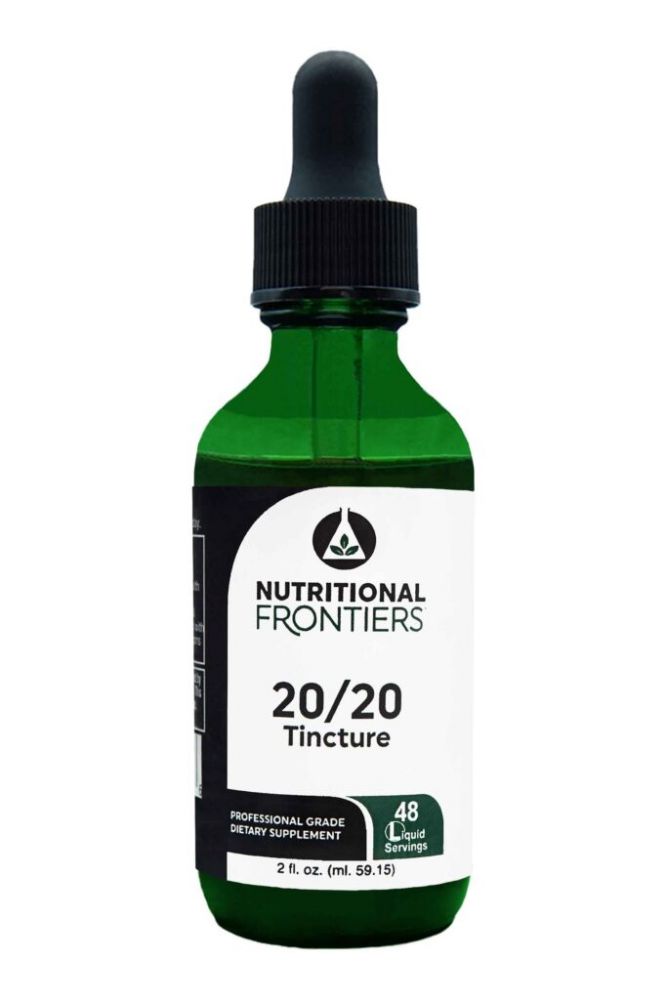 20/20 was designed to preserve eye health. This formulation contains various herbs that have traditionally been used by herbalists to protect the functioning of the eyes. 20/20 may be used by people with poor night vision, cataracts, macular degeneration, and hay fever or allergies that affect the eyes. When allergies cause the eyes to become red, itchy, and weepy, think of 20/20!

Eyebright (Euphrasia spp) is traditionally used to relieve acute irritation of the eyes and nasal passages, characterized by mucus production, itching, and tearing. Herbalists and homeopaths frequently recommend Euphrasia for allergy symptoms localized to the eyes.

White pond lily is an aquatic plant found floating in streams, marshes, and ponds throughout North America. Medicinal uses of white pond lily include as an astringent, pain-killer, and demulcent, among others. White pond lily is unique in that it has both astringent properties as well as being mucilaginous and soothing to mucous membranes. Native Americans used white pond lily for diarrhea and applied it topically to sores. Traditional Chinese Medicine healers have many uses for white pond lily, including for eye inflammation.

Ginkgo biloba is widely used in China, France, and Germany to prevent progression of age-related macular degeneration, with some research studies showing improvement in vision. Ginkgo can increase circulation to the optic nerve, help reduce free radical damage, and perhaps play a role in preventing blindness caused by glaucoma.

Horsetail is one of the oldest species of plants on earth. Its name derives from its brush-like appearance. Horsetail, also called Equisetum arvense or shavegrass, offers a concentrated source of minerals, particularly silica. This important nutrient is beneficial for skin, hair, nails, bones, and connective tissue. In Traditional Chinese medicine, horsetail is used for eye disorders, particularly the typical eye symptoms associated with allergies.

Chinese chrysanthemum flowers and Lycium chinensis are used in Traditional Chinese medicine to improve circulation, eye problems, and allergies affecting the eyes. Chrysanthemum contains antioxidants and is thought to be a good source of lutein, a carotenoid. Lutein (and other carotenoids) have been shown to decrease the risk of cataracts. Lutein might reduce the risk of age-related macular degeneration, improve visual function, and reduce ocular inflammation. Some researchers hypothesize that macular degeneration and cataract formation are the result of oxidative stress, and that cataracts are a self-defense reaction to protect the retina from oxidative damage. They further theorize that using the powerful retinal antioxidants lutein and zeaxanthin will reduce the likelihood of cataracts and age-related macular degeneration. Lycium chinensis fruit, also known as goji berry, is rich in flavonoids which strengthen vascular integrity and are potent antioxidants. In Traditional Chinese medicine, lycium is used to strengthen visual acuity.

Passion flower is used by herbalists for many complaints and is included in 20/20 for its affinity for the eyes. Specifically, passion flower may help with eye strain. Passion flower can be sedating so is best taken in small doses or at bedtime until you know how it affects you.

Plantain is a common weed with many uses. Also called Plantago, plantain leaf and seed are used in both western and Chinese herbal medicine for various disease conditions including constipation, diarrhea, and more. In Chinese medicine, plantain is sometimes combined with other herbs like chrysanthemum flowers for improving vision and reducing conjunctival congestion.

½ to 1 droppers a day, added to water or juice.

If you are pregnant or nursing, or taking any medications, please consult your health care practitioner before taking this or any herbal product.

Not to be used with blood thinning medications like Coumadin.