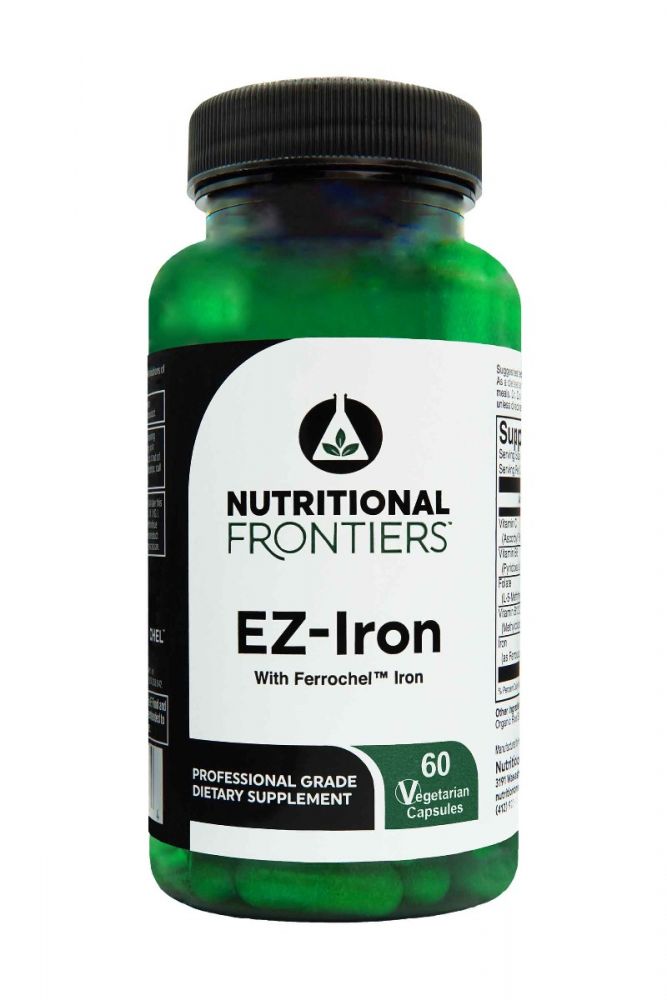 Iron is an essential mineral for proper functioning of our red blood cells and transportation of oxygen throughout the body. Iron is a constituent of hemoglobin which is the oxygen-carrying component of blood. Iron is also part of myoglobin which helps store oxygen in muscle cells. Iron-containing heme is also required for the biological activities of cytochromes and peroxidases. Iron factors in the production of amino acids, collagen, neurotransmitters, & hormones. Since iron is utilized both in hemoglobin and myoglobin, sometimes people who are iron-deficient complain of fatigue even when their bloodwork reveals normal hemoglobin levels.

When body iron stores are low, RBCs don’t form properly: they are smaller than usual (microcytosis) and fewer in number (low RBC), and can demonstrate reduced hemoglobin and hematocrit.

Iron deficiency is the most common nutrient deficiency in the world and most commonly affects children, women of childbearing age, pregnant women, people who donate blood frequently, and people with certain medical conditions.

Iron absorption is inhibited by calcium so it is not recommended to take iron pills with calcium or meals containing calcium. Many other foods and beverages may interfere with iron absorption, including green and black tea, and coffee.

Iron absorption is enhanced by vitamin C so iron supplements or foods high in iron should be consumed with vitamin C supplements or vitamin C-rich foods. That’s why EZ-Iron contains 100 mg of vitamin C per capsule. Vitamins B-12, B-6, and folate are included to provide enhanced support of red blood cell formation.

While ferrous sulfate is one of the most common forms of iron found in supplements, it is not very well absorbed and tends to cause gastrointestinal distress. We use the gentle ferrous bisglycinate chelate (Ferrochel™) which is easier on the gastrointestinal tract. Ferrochel is a patented form of iron bisglycinate that is easier to absorb and is less likely to inhibit the absorption of other nutrients such as calcium, vitamin C, and vitamin D.

For Adults (18 years and older): As a dietary supplement, take 1 capsule daily, with meals. Do not exceed more than 1 capsule daily unless directed by your healthcare practitioner.

Accidental overdose of iron-containing products is a leading cause of fatal poisoning in children under the age of 6. Keep this product out of reach of children. In case of accidental overdose, call a doctor or poison control center immediately.

Children under 18 years should not take this product unless recommended by a physician. If G.I. upset, diarrhea or constipation occurs discontinue use and consult your physician. Don’t take product more than 3 months unless directed by a physician.