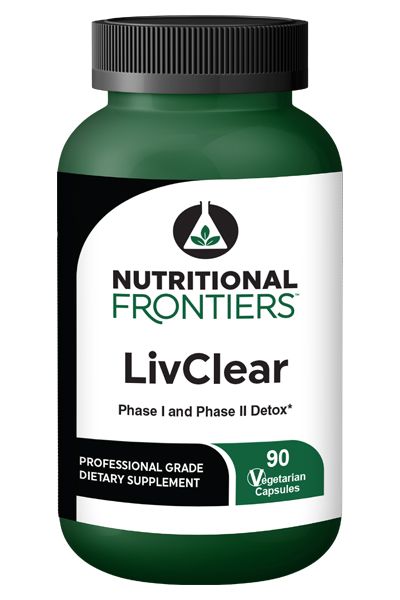 LivClear contains glutathione precursors, amino acids, DMG, VitaCholine™, and milk thistle to support the normal detoxification process.*This formula was designed to provide advanced, balanced support for the multiple phases of liver detoxification. The liver contains a 2-phase detoxification system for managing toxins, hormones, certain pharmaceutical medications, and some herbs. The job of liver detoxification is to transform these substances from fat-soluble compounds into water soluble products in order to efficiently excrete them into the urine or stool. Phase I involves the cytochrome (CYP) P450 system group of enzymes located in the liver’s mitochondria or endoplasmic reticulum, whose job is to help:

Phase I detox chemically transforms these compounds to a less toxic form making them water soluble and ready for Phase II. During Phase I many free radicals are generated making antioxidants a critical component to a well-rounded program. Phase II detoxification involves a process called conjugation. Conjugation refers to the addition or coming together of compounds in order to neutralize toxins, making them more easily excreted through the urine or bile. The major conjugation reactions include glucuronidation, amino acid conjugation, sulfation, glutathione conjugation, acetylation, and methylation.

Our bodies may become overwhelmed by overexposure to the toxins found in air and water sources, chemicals and hormones added to food, as well as chemicals in household goods, fabrics, plastics, and personal care products. Symptoms of fatigue, frequent headaches, lack of mental clarity, allergies, food intolerance, mood imbalances, hormonal problems, and more, may be the result of toxic burden and could induce someone to decide to embark on a detoxification program. LivClear is appropriate for people searching for support for normal toxin cleansing, individuals on a weight-loss program, people exposed to chemical solvents (painters, dry cleaners, construction workers, printers, office workers, auto mechanics, manicurists, and beauticians), people who experience continuing fatigue, and people with chemical sensitivities.*

Milk thistle, also known as Silybum marianum, is a hepatic trophorestorative, meaning that this herb protects and restores function of the liver* according to traditional herbalism. It has been shown to successfully treat non-alcoholic and alcoholic liver damage, cirrhosis, fatty liver, and more. Milk thistle is also helpful in cases of exposure to chemical pollutants like drugs, solvents, halogenated hydrocarbons, and more. Its active constituent, silybin, acts as an antioxidant, and may enhance glutathione levels and normal liver cell regeneration.

The amino acids N-Acetyl Cysteine, L-Glutamine, L-Glycine, L-Methionine, and L-Taurine are also included. N-Acetyl Cysteine is a derivative of the amino acid cysteine which acts as a powerful antioxidant and detoxification promoter. L-Glycine is critical for the amino acid conjugation pathway that neutralizes unwanted substances. Cysteine, glycine, and glutamine are necessary for the formation of the important compound, glutathione. Glutathione is a key part of the liver’s detoxification capabilities with its ability to bind toxic chemicals, as well as being a free radical scavenger. Glutathione is active in Phase II detoxification, helping the body manage carcinogens, toxins, and drugs. Taurine is abundant in the human body in the brain, gall bladder, heart, breast, and kidney. It demonstrates many diverse biological functions including stabilizing cell membranes, transporting ions like magnesium, calcium, sodium, and potassium, and acting as a neurotransmitter. Taurine has been shown in research studies to increase antioxidative liver enzyme activity, including superoxide dismutase and glutathione peroxidase. Taurine also may help normalize cholesterol and triglyceride levels.

VitaCholine™ - Choline is an essential dietary nutrient involved in a wide variety of physiological functions and necessary for the synthesis of phospholipids, which comprise cell membranes. Choline supports proper nerve & brain function and is used in manufacture of the neurotransmitter acetylcholine, as well as being a precursor to the methyl donor betaine. Choline deficiency may be associated with liver damage, elevated liver enzymes, NAFLD (non-alcoholic fatty liver disease), fibrosis, and liver cancer.

DIM is a compound derived from cruciferous vegetables like broccoli and Brussels sprouts. Studies have demonstrated that DIM possesses anti-inflammatory, antioxidant, anti-cancer, and liver-protective effects. DIM plays a role in estrogen and testosterone metabolism and may cause a beneficial shift in the balance of estrogen, testosterone, and progester¬one. Estrogen is produced in both women and men, and inadequate estrogen metabolism is associated with hormonal imbalance in both sexes. Hormone balance is necessary for prostate, ovarian, uterine, cervical, and breast health. DIM may mitigate damage to the liver by toxins and carcinogens by inhibiting pro-inflammatory mediators and free radicals.

Alpha lipoic acid, also called ALA or thioctic acid, is an organosulfur compound found in the mitochondria where it acts in different enzymatic functions involved in energy generation for the cell. While it is synthesized in the human body in small amounts, we get most of our ALA from food sources like meat, vegetables, and fruit. ALA is well known for its antioxidant protective properties because it improves and restores our intrinsic antioxidant systems. According to some research, ALA may help remove heavy metals from the bloodstream. Furthermore, alpha lipoic acid plays a role in glucose and lipid metabolism.

DMG or N,N-Dimethylglycine is a derivative of the amino acid glycine and acts as a methyl donor. DMG is utilized for overall body health both as a methyl donor and by assisting the biosynthesis of vitamins, hormones, neurotransmitters, antibodies & nucleic acids. N,N-Dimethylglycine was patented over three decades ago for treating systemic inflammatory disease and modulating immune response. DMG boasts in vitro evidence of antioxidant effects via free radical scavenging activity and enhancement of the endogenous antioxidant defense system.

As a dietary supplement, take 1 capsule, twice daily, or as directed by your health care practitioner.

If you are pregnant, nursing, or planning on becoming pregnant, do not take this product.