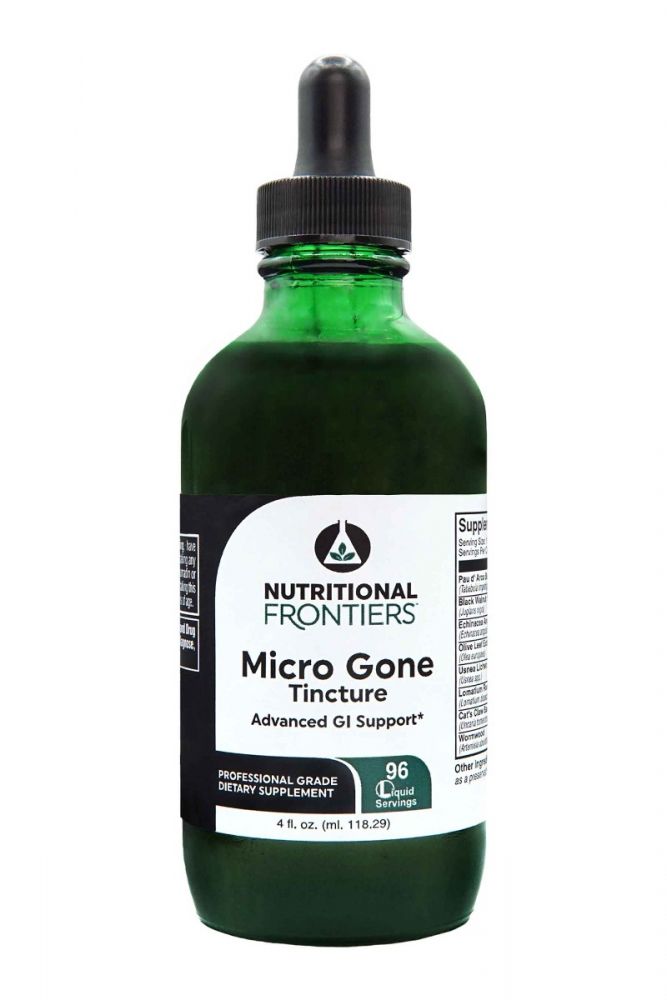 MicroGone Tincture is a unique herbal tincture designed to help fight infections of the gastrointestinal tract.

Pau d’arco is a Latin American herb used to help both acute and chronic illnesses including infections and cancer. In vitro studies have shown it to be anti-bacterial, anti-viral, and anti-fungal. Two of the active anti-fungal constituents in Pau d’arco were shown in laboratory tests to be as potent as ketoconazole. Indigenous people in Central and South America as well as Caribbean healers use pau d’arco for infectious diseases, sexually transmitted diseases, wounds, and other health conditions.

Black walnut hulls (Juglans nigra) and Butternut bark (Juglans cinerea) are native to the Middle East but now have worldwide distribution. Various parts of these trees are used medicinally, including the walnut hulls and the bark. Juglans has affinity for the gastrointestinal tract and has been used to alleviate hepatic dysfunction, jaundice, reduced appetite, and both constipation and diarrhea. Juglans may be used internally or topically for ringworm, eczema, and herpes. This herb may also help eliminate tapeworms and pinworms.

Echinacea Angustifolia is well known for assisting the body in recovery from acute infections. Echinacea is a wildflower native to North America and was used by some Native American tribes to treat venomous bites. It activates white blood cells and may increase interferon production, which is important in fighting viral infections. Recent research indicates that echinacea is most helpful at the onset of acute infections rather than for prevention of colds and flu.

Usnea barbata (tree lichen) has been used as an anti-microbial: both antibiotic and antifungal. Usnea also contains polysaccharides that may be immunomodulating. Herbalists have also used usnea to stimulate digestion since it has bitter properties.

Lomatium root is native to western North America and was used by Native Americans to fight all manner of infections. It is effective against both gram positive and gram negative bacteria, and may also be anti-viral.

Do not use if you are pregnant or nursing, have tuberculosis, or have had an organ transplant.

If you are taking any medications, including blood thinning medications like Coumadin or aspirin, please consult your health care practitioner before taking this or any herbal product.

Not for use in children under 3 years of age.