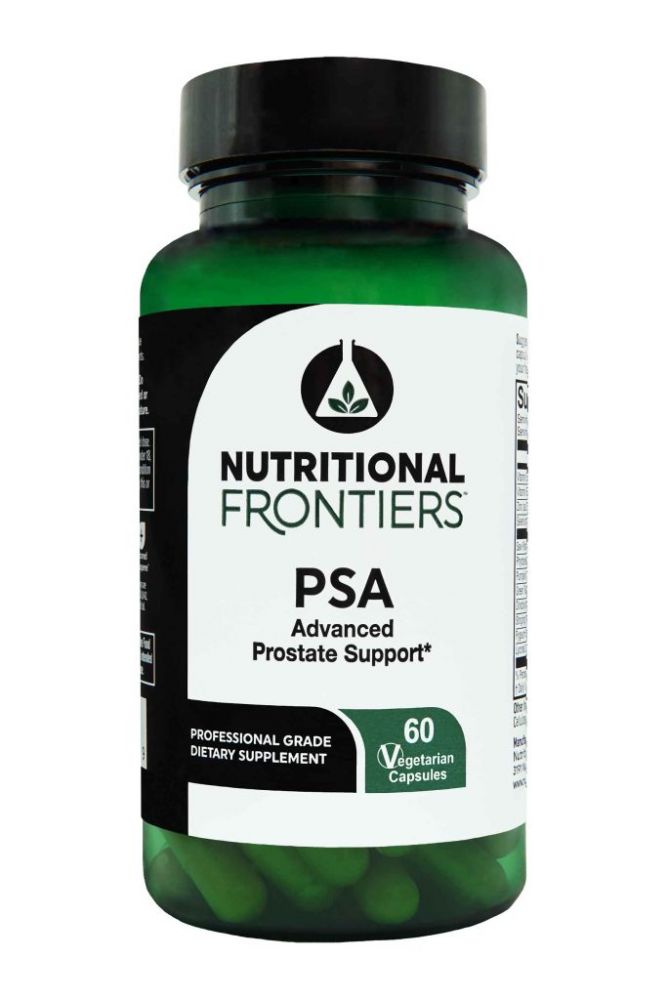 PSA contains a combination of nutrients and herbs to promote proper function of the prostate gland.* The prostate is a walnut-sized gland that plays a role in male reproduction. Many men over age 50 have some prostate enlargement, called BPH - benign prostatic hyperplasia. The enlarged gland causes obstructive symptoms like urinary frequency, urgency, and even sometimes urinary incontinence. The Nutritional Frontiers’ supplement PSA was designed to be helpful for balancing hormones, managing DHT levels, and positively affecting the enzymes that support healthy prostate size and function.

Zinc is a mineral with a myriad of uses in the body. The prostate gland has the highest concentration of zinc in the body and requires 10 times more zinc than any other organ. Zinc supplementation also may help inhibit 5-alpha reductase. Vitamin B-6 (pyridoxal-5-phosphate) may aid in the utilization of zinc.

Saw palmetto, also called Serenoa repens, is a plant native to the Caribbean Islands and the Southeastern USA. Serenoa contains flavonoids, fatty acids, and sterols which inhibit 5-alpha-reductase, an enzyme that converts testosterone to its more active form, DHT. Therefore, saw palmetto has been used effectively in people with prostate disease and PCOS or other conditions with elevated testosterone levels.

Phytosterol Complex (Beta-sitosterol), a compound derived from plants, has a similar action of inhibiting the enzyme that produces DHT. Beta-sitosterol may improve urinary residual volume and urinary flow in men with BPH though according to research so far, it has not been demonstrated in research to actually reduce prostate size.

Pumpkin Seed Powder Extract, research suggests, may help with overactive bladder, a condition characterized by a sudden urge to urinate that may lead to an involuntary loss of urine. Researchers estimate that 16% of men and women suffer from overactive bladder symptoms such as urination urgency as well as frequent daytime and night urination. Several studies have shown compelling data in pumpkin seed extract’s ability to support bladder function and combat the symptoms associated with an overactive bladder. In an animal study published in the Japanese Journal of Medicine and Pharmaceutical Science, rats supplemented with pumpkin seed extract significantly improved bladder function and decreased urinary frequency.

Green tea comes from the same plant as black tea: Camellia sinensis. Green tea, unlike black tea, is not fermented after being picked therefore the active components of the herb remain unchanged. Because of its roles as a powerful antioxidant, green tea is included here to support detoxification. Furthermore, drinking tea (and possibly other caffeinated beverages) may influence serum concentrations of a protein called sex hormone binding globulin (SHBG), which binds circulating hormones like DHT.

DIM is a compound derived from cruciferous vegetables like broccoli and Brussels sprouts. DIM competes with DHT (active testosterone) for binding at testosterone receptors. DIM also plays a role in estrogen metabolism and may cause a beneficial shift in the balance of estrogen, testosterone, and progesterone. Inadequate estrogen metabolism is associated with hormonal imbalance in both sexes.

· Stinging nettle (Urtica dioica) is a nutritious plant historically used as medicine and food. The leaf, root and seeds all possess medicinal benefits. Like saw palmetto and Pygeum, nettles root may also block the action of 5-alpha-reductase and thereby reduce the effects of excess testosterone in the body. Some case studies and clinical trials show improvement of BPH symptoms from use of nettles. Nettles combined with saw palmetto was shown in studies to be as effective as the prostate medication finasteride, with fewer side effects! The study participants noted improved urinary flow, quality of life, and erectile function. Another study combining saw palmetto with nettles root in elderly men with BPH and related urinary symptoms showed reduction of urinary symptoms.

Pygeum africanum bark comes from an evergreen tree found in southern and central Africa. Several positive clinical trials have been conducted in Europe and a majority of trials show benefits of taking Pygeum on frequency of nocturia (night-time urination that interferes with sleep), urine flow rate, & residual urine volume. Pygeum bark may help control the activity of the testosterone - producing enzyme 5-alpha-reductase, especially when combined with nettles. Therefore, they can help balance the ratio of testosterone & estrogen in the body.*

As a dietary supplement, take two (2) capsules daily, preferably with a meal, or as directed by your healthcare practitioner.

Do not exceed recommended dose.

Pregnant or nursing mothers, children under 18, and individuals with a known medical condition should consult a physician before using this or any dietary supplement.